Distinctive marks of the MacKinnons

Like many Clubs, Organizations, Companies and other Societies, scottish Clans also have Signs, Scripts and Clothing to recognize them.
In the following we would like to bring you the identifiers of the MacKinnon’s closer.

Remember the Death of Alpin… Think, or even remember Alpin’s Death.
This Slogan dates back to around 1500 and is based on Kenneth MacAlpin, the founder of the Dynasty.
Kenneth is considered one of two Kings who died peacefully in his Bed of old Age. Guesses, however, suggest that he was actually a Victim of a Treason, what the slogan is to remember.

Fortune favors the bold… that was the personal Motto of a MacKinnon’s Family member from Antigua and featured as the Motto of the Clan.
It was created around 1800 and is reminiscent of the Clan Story. The MacKinnon’s were a merchant Clan who brought it through diligence to Wealth and Estates. It is also found on the Crest, the Clan Badge.

Unlike today, in the earlier Centuries a Clan could not be recognized by its Tartan -the Check Pattern.
Apart from the fact that it was expensive to weave certain Colors and Patterns, it was also a time of Wars and Feuds. If one had already been recognizable as a Member of a certain Clan because of the Clothes, it would not have been conducive to Life and Limb.

The Tartan, the usual Check Pattern of the Kilt’s for Scotland and the Clans was created in 18./19. Century.
After the suppression of the last Jacobite Uprisings was in 1746 adopted by England, the -so called- Dress Act, whereby was the typical Highland Clothing (Belted Plaid, the precursor of the modern Kilt) and other symbols banned. When this was repealed in 1782, people remembered the old Traditions and the Kilt received his Revievel. On this occasion, the individual Clan developed for they typical colored Patterns which have been supplemented or expanded by members over time. For MacKinnon’s there are the following 5 main Tartan… 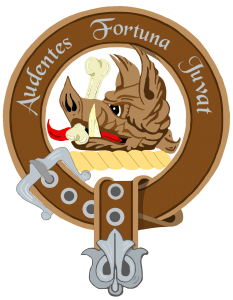 The Clan Crest has replaced the Plant-Symbol in modern Times. It is usually a metal Badge or Brooch, which is worn today for example on the Headgear as a distinctive Sign. Clan MacKinnon’s Clan Crest has a Boar Head, with Bone in his Mouth.

According to a Legend, a Member of the Clan was surprised by a Storm on the Hunt and sought Shelter in a Cave.
However, even a Boar shelter sought in that Cave and stormed off. In order to be able to defend themselves, the Hunter grabbed the first one (a Deer-Leg Bone) and rammed it into the Boar’s Mouth, whereupon it scared the flight.