The History of Clan MacKinnon

Origin of the Clan

The Year was 834.
Cinàed MacAlpin, Son of the irish King Alpin Mac Eochaid, ascended the Throne of Caledonia (roman Name of Scotland) and gave himself the christian Name Kenneth. With great effort, and according to a legend with an assassination, he managed to free the then Scotland from the rule of the Vikings. He also managed to unite the picts Tribes and finally named the Country Alba.

As far as we know, Kenneth had two offspring named Gregor and Findanus.
Gregor is considered the founder of the Clan MacGregor from which later the Clan MacGrant and the Clan MacAulay emerged. Finguine, a descendant of Findanu, was a famous Warrior of the 12th century. He changed the name to the gaelic form Fhionighain and thus founded the Clan Mhic Fhionighain (Son of the Fingon). By the anglicization in the 18th century it became MacKinnon. With diligence and skillful trading, the Clan prospered, keeping the leadership on the Isle of Sky, the Clan’s ancestral Home, and holding important posts and positions in the military and civilian sectors. Later they were able to expand their lands to the Island of Arran and Mishnish, a district in the north of the Island of Mull.

As in the 1640s, a civil War in the Kingdoms of Scotland, Ireland and England prevailed akm it was the first support of the royal Stewart Dynasty and subordinated to General Montrose. Even when Charles I. was executed they remained faithful to the Stewarts and supported his Son, the future King Charles II.
Under Queen Anne, a Union Law was passed in 1707 whereby Scotland lost its sovereignty and it was united together with Ireland and England to Britain under the english Crown.
The result was uprisings and coup attempts of followers King James of Scotland from the House of Stewart. In all the Jacobite tusks –the followers of James became bennat after his Latin James– in the years 1715 and 1745 the MacKinnons took part as loyal subjects of the Kings of the House of Stewart.
However, after failing to bring Charles Edward Louis back to the Throne in the person of Charles Edward Louis Philipe Casimir Stuart (Bonnie Prince Charlie), a hard time was breaking. The Clan impoverished and had to sell its Lands. Through the later Highland Clearences, especially in the 19th century, many MacKinnon’s were forced to leave Scotland and emigrate.
The main destinations were Canada, the USA and Australia.

Ancestral Seat of the Clan 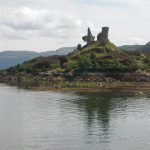 Clan MacKinnon’s ancestral Home is Castle Moil, also known as Dun Akyn, Dunakin Castle and Dun Haakon. It is located on a Hill near the Town Kyleakin from where you can also see Kyle of Lochalsh on the scottish Mainland.
According to legend, Findanus, founder of the Clan MacKinnon, had acquired the Castle when he married a norwegian Princess known only by the Nickname Saucy Mary. What is certain is that there is indeed a norwegian Connection. King Håkon IV. gathered there in 1263 before the Battle of Largs his longboats. In this Battle is also the origin of the Thistle as the National Flower of Scotland.

According to descriptions that existed, probably in 15./16. Century built Castle only by a rectangular Donjon from 3 to 4 floors with approximately 3.5 meters thick Walls. Today, only the Basement is preserved, in which suspects the Kitchen, as well as Storage Rooms. Storms in 1949 and 1989 overturned more Remains.
Last official Resident was Neill MacKinnon, the 1601 deceased Nephew of Sir Lachlan MacKinnon, 26th chief of Clan MacKinnon.